Trophies and Achivements for Dragon's Dogma .

Most Efficient way to Platinum:

All trophies can be attained through a minimum of two playthroughs and it is recommended to finish all pre-planned missions once they have been found on NG+. You should not confuse “Post Game” with NG+, the former is simply a free roam dungeon that opens up before the playthrough's end, when you fall through the Everfall. For more information on the game visit the game's wiki

Collected all other Dragon's Dogma trophies.

The platinum trophy is acquired when all other trophies are unlocked.

Completed fifty quests off the notice board.

Completed all pre-planned, non-notice board quests.

Simply change your vocation at the Union Inn at Gran Soren.

This trophy is not too hard to attain, however patience is required in order to kill this many enemies. The amount of kills does not change once the game is completed and restarted, so it rolls over to New Game Plus

Directly enlisted a pawn to your party

Enlisting a pawn on a local is not hard to do as you can find pawns that dwell throughout the world. However a well populated location to hire local pawns is near the Pawn Guild at Gran Soren. Simply walk up to a pawn and recruit

Enlisted a pawn from beyond the rift to your party.

Simply enlist a pawn into your party using a riftstone to access a wider range of pawns.

Enlisted a large number of pawns.

Enlist at least 70 pawns into your party. You can do this locally or via riftstone. You can also enlist the same pawn multiple times into your party and it will still count towards the amount of pawns enlisted. It is recommended you do this in offline mode to bypass the gifting and rating sections.

Changed the vocation of your main pawn.

Simply change the vocation of your main pawn at the Union Inn found within Gran Soren.

Used a wakestone to restore the dead to life.

There are two ways to go about doing this. One is by completing the mission Reaper's Scorn or by using a wakestone when a NPC is killed or on yourself when you have been killed. Wakestones are commonly found within the Everfall (post game area) and can also be created upon finding three wakestone shards on the normal landscape.

A simple trophy, all that needs to be done is to give an item that is considered ‘rare' to the NPC at the Black Cat. Another way of doing this is by going onto the rooftop of the Black Cat; here you should be able to find a chest with a forged wakestone shard. Picking up this shard should earn the trophy.

A relatively easy trophy to earn, just find two items that can be combined together and combine them. A list of items can be found on this page.

This trophy takes a while to achieve as there are quite a few pieces of rare armor and weapons. The recommended approach to this trophy is to buy all pieces of equipment and weapons from each vendor found within the world, completing notice board and pre-planned quests, and defeating or participating in fighting the Ur-Dragon. A full list of weapons can be found here while a full list of armor can be found here. You should keep note of what you have had so you can sell items and recover some cash to reinvest in new ones that count for the trophy.

Dress a male member of your party in a dress.

Simply recruit a male member of the party, after this go to the Black Cat found in Gran Soren and buy Lady's Garb, once the garb has been bought equip it to the male pawn. For more information about this trophy visit here.

Simply give away fifty presents to NPCs. It doesn't matter who the NPC is that you give the presents to, the amount of presents given away is not affected by the completion and start of a new game.

Acted as a reliable travel companion.

Simply complete an escort quest found within the game. An easy way to do this is to accept and complete Guard Duty one of the first escort quests available in the game. To access this quest simply complete Call of the Arisen and head back towards Cassardis once arriving head to the inn, where Madeleine will offer you the mission.

Raised a person's affinity to maximum.

An easy way to complete this is simply to complete all of the missions that pertain to the NPC Aelinore. You will first be able to do this when a cutscene points to her in the mission Come to Court. Continue to complete both Arousing Suspicion and Duchess in Distress, keeping her alive in both, and she will develop a max affinity for you. It is also easy to obtain highest affinity with Madeleine if you complete the quests to help her open her shop and later on skip town.

Entered into the Azure Caverns.

Entered into the Soulflayer Cavern

There are two entrances to Soulflayer Cavern one that is beyond the Greatwall in Cursewood and the other under the path that leads to the Ruins of Heavenspeak Fort. There are no quest requirements to enter the area however you must complete Honor and Treachery before the cockatrice will appear here.

Into the Ancient Quarry

Enter into the Ancient Quarry.

Entered into the Duke's Manse.

Into the Frontier Caverns

Entered into the Southwestern caverns. 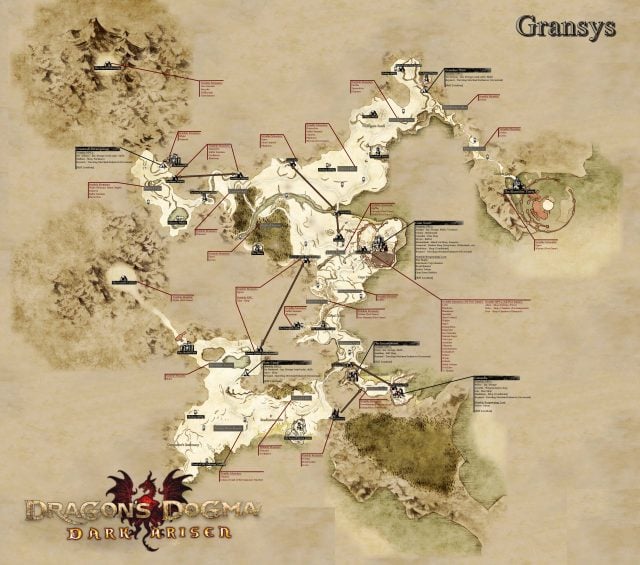 Completed the adventure a second time.

Simply complete the main storyline a second time. Nothing else is required for this trophy.

Two highly recommended ways to do go about doing this easily is to use the ‘Suasion' skill when selling items and by using the wakestones that are dropped within the Everfall and selling them. Note: You do not need to have 10,000,000 G on you to earn the achievement. The way the trophy is earned is through your lifetime earnings within the game, so buying and reselling gear is an option.

This trophy is a rather complex one that can easily be missed. After completing the mission Upon a Pawn head back to the inn at Cassardis, here you can be assigned a mission by the NPC Madeleine. After the completion of this quest continue to move forward in the game. After the completion of two missions, A Matter of Myrmidons and Lure of the Abyss, an NPC named ‘Mason' will offer you a quest named Chasing Shadows. Once this quest is completed talk to Madeleine. Note: Some players will have to leave Gran Soren and return before Madeleine opens her shop.

This is a story based quest that cannot be missed. Just kill the boss found within the prologue.

This is a story based quest that cannot be missed. Simply leave Cassardis upon waking up.

Summoned your own pawn.

This is a story based quest that cannot be missed. Summon your person pawn after leaving Cassardis.

Earned the approval of the Enlistment Corps.

This is a story based quest that cannot be missed. Severe the head off of the mandatory boss.

This is a story based quest that cannot be missed.

Received a writ from the castle.

This is a story based quest that cannot be missed. Just visit the Pawn Guild and Everfall after arriving in Gran Soren.

Attended an audience with the duke.

This is a story based quest that cannot be missed. Complete three of the four quests given to you.

This is a story based quest that cannot be missed. Simply visit the Duke when given the ability to.

This is a story based quest that cannot be missed. Finish the quest: Deny Salvation

This is a story based quest that cannot be missed. Attained during the quest: The Final Battle.

Peered into the very depths of the world.

This is a story based quest that cannot be missed. Visit the king in Gran Soren in Post-Game.

Escaped the yoke of eternity.

This is a story based quest that cannot be missed. Use the Godsbane blade after the defeat of the last boss.

Dealt the blow of deliverance.

This is a story based quest that cannot be missed. Deal the final blow to the last boss.

Obtained the mighty power of sovereignty.

This can be attained by choosing not to fight the dragon when you're given a choice to do so. However choosing this option will end in a ‘game over' screen.

Soar unto a new world.

When first fighting the last boss use the godsbane during the fight. However after the cutscene is done you will be sent to a ‘game over' screen.

Took refuge in an illusion.

After the first defeat of the last boss, choose to walk away when the boss offers you the chance to. You will see a copy of yourself before initiating a cutscene, after this cutscene a ‘game over' screen will appear.

Put an end to all things.

Use the Godsbane after the defeat of the final boss.

Defeated a hydra or archydra.

This can only be attained in post-game. There are, however, two ways to go about collecting this trophy. One of the ways is to defeat the Archydra found within the Chamber of Hesitation in the Everfall. The other way to get this trophy is to defeat the Hydra found within the Frontier Caverns during the quest: A Challenge. The Everfall's chambers as below: 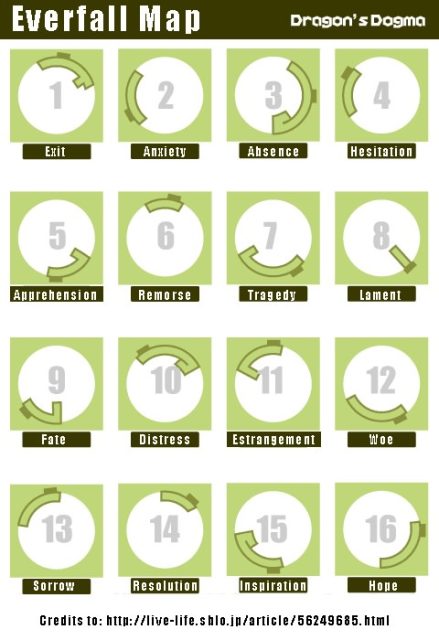 This can only be attained in post-game. There are three places that these enemies can be found depending on if the DLC is installed. The first two can be found within the Everfall found in the Chamber of Confusion and Chamber of Sorrow. They can also be found on the Rotunda of Dread on Bitterblack Isle too.

Defeated a drake, wyrm, and wyvern.

This can only be attained in post-game. The drake is one of the only dragon kin that can be found post-game, if you simply progress through the story finding it should be easy as it is found close to the Shadow Fort other locations where the drake can be found are the Estan Plains, Conqueror's Sanctuary, and in the Chamber of Fate within the Everfall. There are two wyrms found throughout the game with one being found at the end of the Watergod's Altar in post-game and the other can be found within the Chamber of Distress in the Everfall. There are also two wyverns found within the game with one being found on conquest road and the other at the end of Bluemoon Tower both in post-game. For more information on these creatures visit: Drake, Wyrm, Wyvern.

This is only available in post-game within the everfall. Due to the nature of the online Ur-Dragon fight it is highly recommended that you fight the Ur-Dragon offline due to the large health pool it will probably have. However if approaching this online it is recommended to fight it when it has considerably low health and to use the Maker's Finger when fighting it.

Whenever you defeat dragon-kind, there is a chance that your equipment will become dragon-forged. There are multiple ways to go about doing this. One of the most preferred is killing the dragon in the quest Final Battle as there are no armor requirements for the upgrade. However a full guide to dragonforging weapons and armor can be found here.

Learned all of the skills of a single vocation.

Depending on the vocation being used this can be attained on the first playthrough as long as you keep your vocation the same either at the start of the game or as soon as you change it within Gran Soren. You will unlock this as you progress into the game and level up, so it is not something you should plan in advance.