Combat in Dragon's Dogma is covered on this page, including the basic and advanced combat mechanics helpful in advancing through the game. Find enemy details, interactions that can be made with enemies, tips when using weapons, and more. 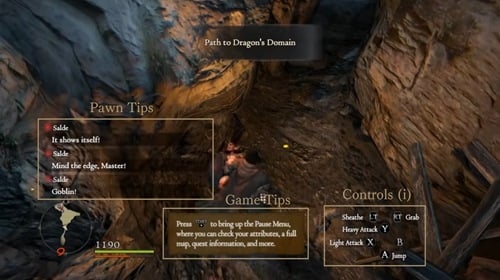 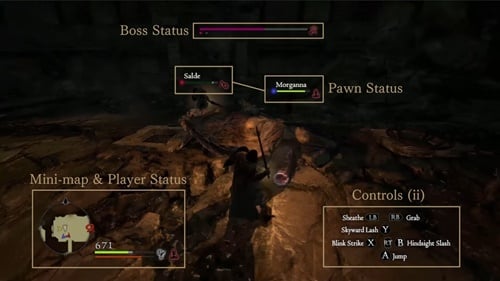 Combat is in third person and features a combination of ranged, melee and shield based actions. The mechanics of combat are deep and tactics vary by playstyle, vocation and the makeup of your party of Pawns and your Stats. Killing Enemies is one of the 2 activities along with completing Quests that earn the Arisen leveling experience.

Vocations and their available Weapons determine most of the actions that are available to you during combat. During the heat of combat, you and your pawns will take appropriate action and can perform several actions such as throwing foes/allies, picking up foes/allies who are unconscious and lending aid. You may pause the action to ingest Consumables and administer aid to your pawn party members. Pawns may also be given Items to hold which they can use at will during the heat of battle.

Most enemies feature at least 1 major damage weakness or vulnerable part of their body and your pawns will often offer tips on how to attack them, depending on their experience with this enemy type. Learning where to attack and how is important to getting out of encounters unscathed. Enemies can be quite tough, so a deliberate and cautious approach to fighting is recommended especially when you are starting out. Do not be afraid to retreat if you've run into a battle with a strong foe who far outclasses you. The game will not protect you from encountering these highly powerful beasts, and retreat is always a legitimate option.

When casting spells, there are two extra actions one may perform: Zooming & Manual aim. Zooming closes off extra distance from the Arisen's peripheral. Click the right stick to perform this action. Manual aim turns off the auto aiming feature and allows the Arisen to attack critical points. This also allots the Arisen to boon his or her own weapon. Click the left stick to perform this action.

Skills and weapons in Dragon's Dogma have different damage types, namely physical and magickal damage. Physical damage can be divided into slashing damage and bludgeoning damage, and which is dealt depends on the weapon used. Magickal damage can be divided into five different elements - fire, ice, lightning, dark, and holy. While some weapons have innate magickal damage, it is usually dealt through certain spells, namely those from 'blue' vocations. Knowing what damage and debilitation resistances and weaknesses different enemies have is key to smooth game progression. When a pawn gains enough knowledge about a certain enemy, they will often let you know what kind of damage is the most effective during battle.

Keep in mind what damage resistances and weaknesses your own armor has, as well as what damage types different enemies deal to avoid putting yourself in precarious situations.

As you explore the world and pick up new materials, you'll be able to craft and find new items. Come up with innovating combos and ways to use these items to aid yourself in battle. Make use of the debilitation 'drenched' for example. Drenched characters take more damage from ice and thunder attacks. If you're a sorcerer utilizing attacks of these elements, consider throwing a flask of water or two before casting your spells. Take note of the effects each item in your inventory has and be aware of any environmental items you can use to your advantage. You never know when that pie will come in handy.

Pawns may also use items in their packs during the heat of battle. Instead of using your time to throw that flask of water, one of your pawns can do it for you. Whether or not a pawn decides to use the items in their inventories during battle depends on their pawn knowledge, so show them how it's done in battle first for them to follow suit.

Slaying enemies leaves a corpse that can be looted for Items. Often, beasts will drop valuable Materials which are used in Enhancement.

Upon player death, you will be offered a choice to restart at the last checkpoint, return to the title or if you have any in your inventory, consume a Wakestone to revive you at the point and place of your death. As a result, wakestones are valuable items to keep stocked, and in addition to being purchasable from Merchants, can be farmed in The Everfall at Endgame.

By tapping the grab button (RT on Xbox controllers, R2 on PlayStation controllers), players have the option to grab smaller enemies and sling them over their characters shoulders to throw them into environmental hazards or into other enemies, damaging them both. Players will have to first incapacitate the enemy, for example by knocking them down, before being able to pick them up. After being picked up, enemies will resist by trying to wiggle out of the player's grasp, eventually breaking free after a period of time. On the flip side, larger enemies may pick up pawns and the player, in which the player will be given an opportunity to wiggle out of the hold. Allied pawns can also be picked up, but will not put up much of a fight to be let go.

By instead holding the grab button, players can put smaller enemies into a grapple. The same conditions apply, in that enemies will have to be incapacitated prior to being grappled and that they will have an opportunity to wiggle free. Pawns can also perform this action, with fighter and warrior pawns grappling enemies more often than other vocations. Once grappled, enemies take more damage from ally attacks and in some cases may even be hit by their own allies. If a player's character is grappling the enemy from behind, they will have the option to deal a heavy kick to their prisoner, launching them.

You may jump and grab onto the larger Enemies in order to climb them and reach their vulnerable spots for attack. Maintaining your hold on the creature requires Stamina and when depleted you will let go of the monster. If a monster shakes while you are holding onto it, stamina will be depleted faster. At times certain creatures will take direct action to remove you, whether it's grabbing you, slamming into structures or slamming into the floor. It can be helpful to look for those signs and dislodge before suffering the damage of these actions.

The types of attacks you can take while climbing a monster are limited and depend on your vocation, and most skills can not be used during climbing with a handful of exceptions.

Sometimes when shooting an arrow, delivering the final blow on an enemy, when pawns are being dragged away by enemies, or when they themselves are grappling enemies, time seems to stop and the camera pans to whatever special action is happening at the moment. This is due to cinematic camera. This feature can be useful to beginner players to keep track of what their pawns are doing and how they can capitalize on the opportunities these actions give them. For some players, this may be disruptive to gameplay and get old after a while, so do note that cinematic camera can be turned off in the options menu.